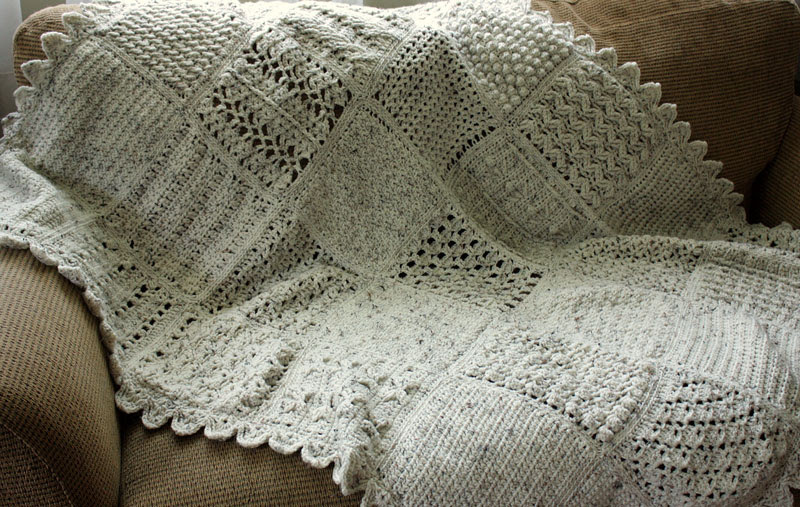 So it took me less than two weeks to make this afghan. I think the seaming/border took me as long as the blocks themselves. I blame the heat, as I had to do the seaming and border in small spurts.

Let's do the project stats:

Pattern: Crochet A to Z Sampler Afghan by Darla Sims

Changes to the pattern: none (huh? nope, other than not paying attention the the block layout, I followed the pattern as written. Shocking).

Problems with the pattern: none. Considering my mediocre crochet skills, I was able to figure out all the patterns.

Overall impressions: this was a fun project to make (less than two weeks is a good indication that it kept me interested), and overall, I'm happy with it. As I've said before, my bigget issue with crochet sampler afghans is the variety in density in the different squares. I think of this more as a decorative afghan than a true snuggling afghan. However, I'm willing to bet that it will see some nap time. So we'll give it a thumbs up.

Well, so I guess that's really my first completed project of 2010. Eeeks (okay I did finish a sweater for Matt back in January, but the bulk of the knitting on that was done in 2009). Now if I can just stay on track on any of the other 30 projects started and or abandoned maybe I'll get something else done this year.
Posted by Cindy at 12:39 PM