I know it's been a while since I've blogged, and there's been several projects that have been missed. The blog had become work, especially as I wasn't doing a lot of knitting (or other crafty type things). However, I'm back into the knitting groove and thought I would try to get back to the regular blogging again. A little template change, a new camera lens and some finished projects might just be the ticket. 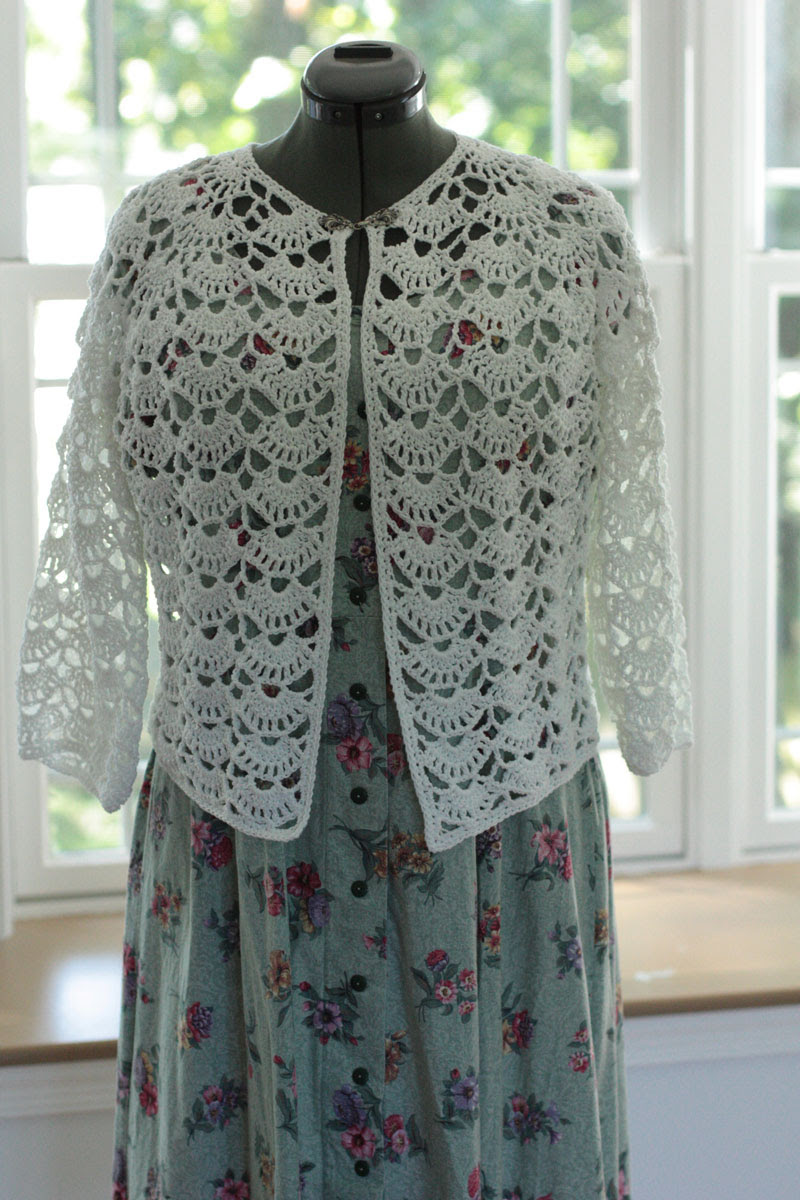 Two projects have been finished since my last blog post. First up is my third Sambuca, and by far the most successful one: I needed a quick white lacey cardigan to attend an outside evening wedding (that's not the dress I wore, by the way, as that one does not fit). Let's do some project stats!

Changes to the pattern: I wanted to make it a little less boxy, so I went down a hook size when I hit the waist, then down an other hook size for the last two rows. I did the same thing on the sleeves, hoping to make them more narrow.  I also did 3/4 sleeves.

Problems with the pattern: None. Third time I've made this, and I think I finally got it right!

Overall thoughts: Exactly what I wanted/needed. It worked up quickly, it's a great little summer cardigan to slip on when things get a bit chilly (over air conditioned restaurants, for example). I'm not thrilled with the clasp, so it might come off and get re-sewn (I think I skewed it a bit when I sewed it on). 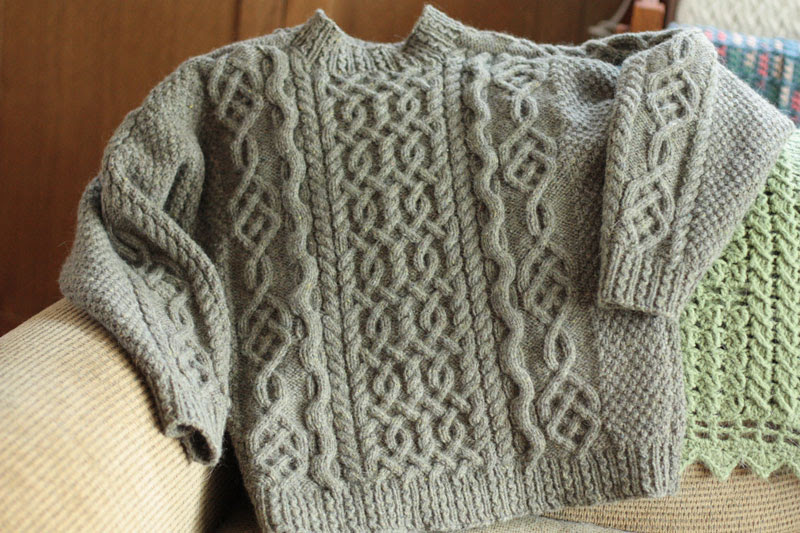 This one went in and out of rotation quite a bit. Since I couldn't memorize the cables, it was put aside often. However, I finally got into the groove and finished it for Matt's birthday. In August (ya, it was about 93 degrees... yet he was still kind enough to model it for me): 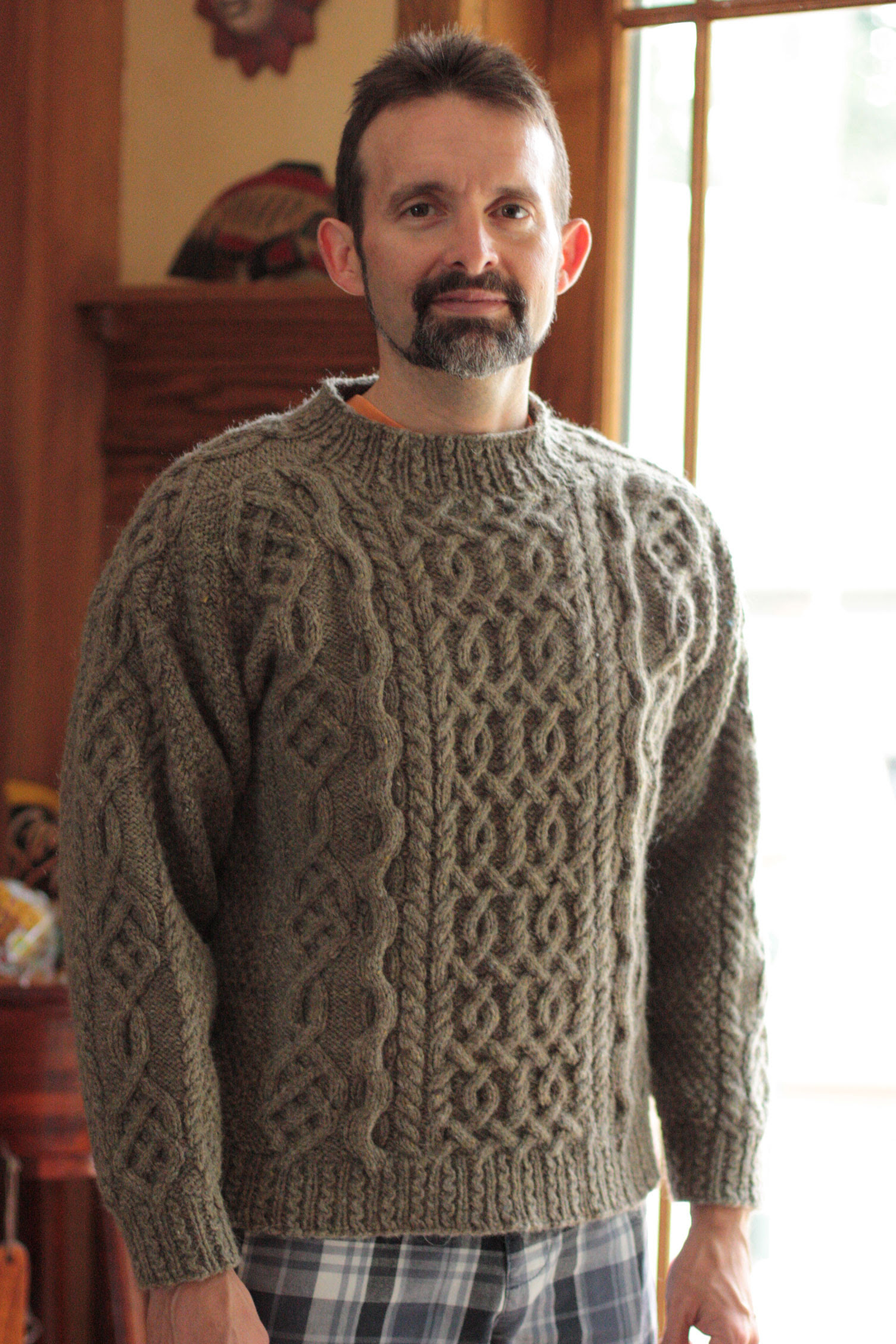 There is a huge issue with this one, but first, the project stats:

Pattern: St. Patrick's by Lisa Lloyd (from A Fine Fleece)

Problems with the pattern: None that I can remember.

Changes to the pattern: The big change is the sleeves. I ended up switching charts on the sleeve. I'm not a huge fan of the snake cables (even tho' it is a St. Patrick sweater), and I love the cables that she used on the sides. This did change my gauge, so I had to do some math so that sleeves weren't huge).

Overall thoughts: There was one super huge issue that didn't show up until I went to block it. The Beaverslide yarn is not dye lot  marked. This should've been my red flag... but I didn't alternated skeins. After the soak there was huge striping of color changes. At first I thought it was skein changes, but some of the color changes would've been with in a skein, so it was the roving that was different dye lots. If you use this yarn, treat it like a hand dyed and alternate skeins. 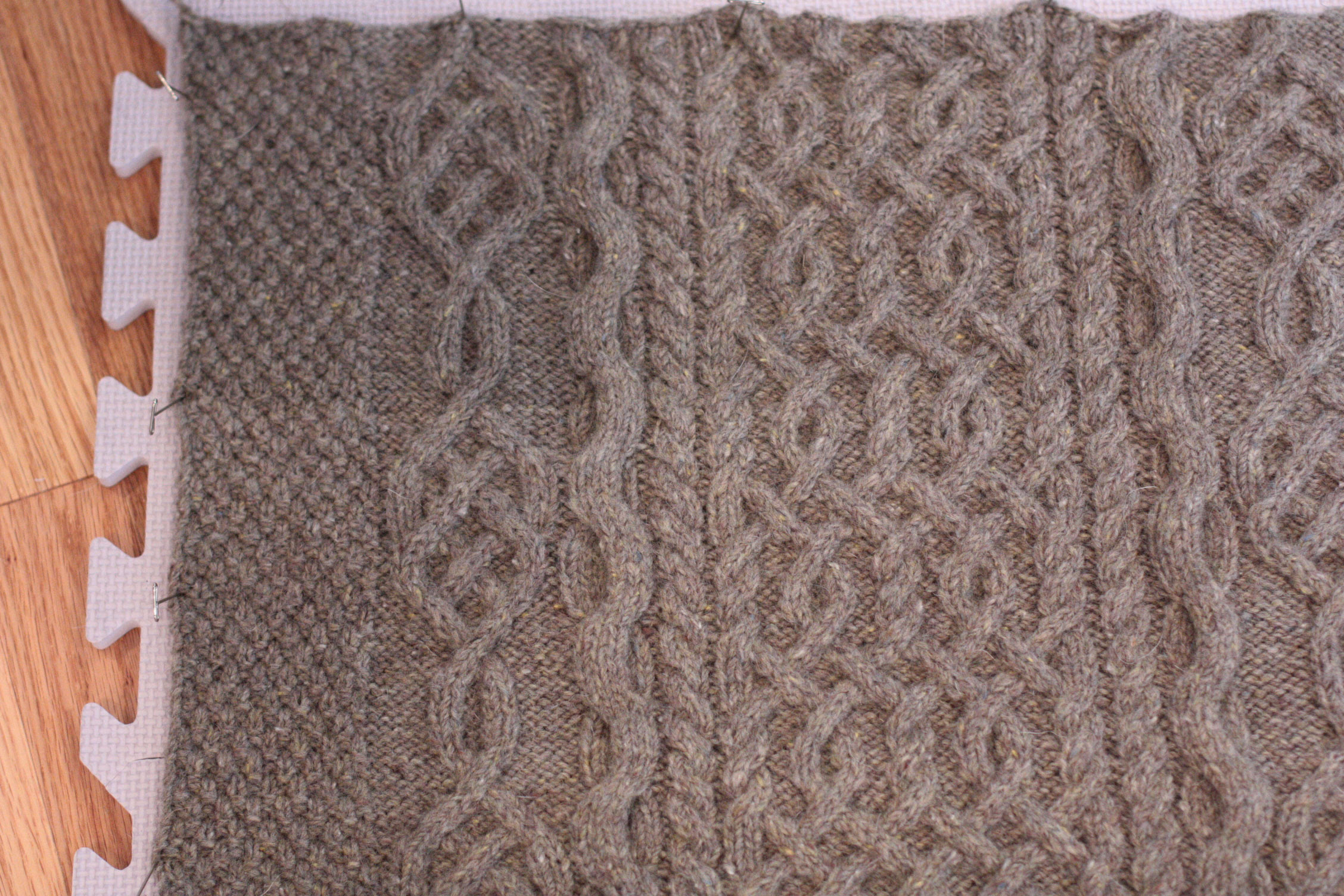 So the sweater is finished, but I need to do an overdye (my first try will be to tea dye it... I'm hoping that will be enough to even out the color difference).

Other than that, it's probably one of my favorite finished projects. Yes, it is very warm. Matt will love it in the winter. The wool/mohair blend is soft enough for him and it doesn't stink. I love the color of the yarn (and I'm hoping that the tea dyeing doesn't kill the heathered nature of the yarn).

So those are the two finished projects so far. I've had a few projects started, then frogged. I've also had to frog some previous projects that weren't working out. I'll have the in progress projects over the next few days.