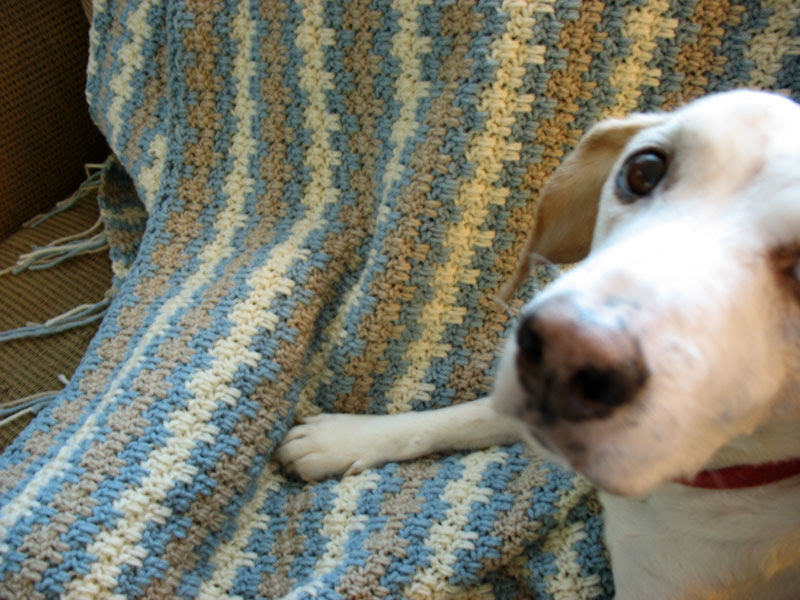 Okay, so I'm recycling an in progress photo for the finished... but I love that photo of Jake, and the afghan looks exactly like that, but with no ends. Let's do some project stats:

Problems with the Pattern: none.

Changes to the Pattern: did a couple. The DC in the row below were to be in front of the chains, but I did them around (so the afghan is completely reversible). I completely changed the color sequence. Wove in the ends rather than do fringe (we discovered we are not fans of fringed afghans).

Overall Impressions: I'm very happy with how this turned out. Doing the DC around the chain stitches makes for a very squishy thick afghan. The TLC Essentials is a nice afghan yarn. It's a good size and doing it in two stages was nice (got half of it done, put it aside for a while, then it finished up in a few weeks).

I actually made this afghan before, using the colors used in the pattern, and following the directions exactly. It's our dog protector couch cover (it's easier to wash an afghan than it is the couch). If you've seen my family room couch, you've seen this afghan, but Jake also modeled it for me back in the day: 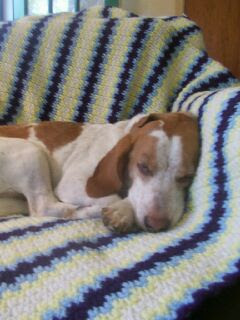 So that's the 20th finished project done for 2009. The question of the day will be shall I cast on something new (probably) or try to get some work done on project #21 (which is TBD).
Posted by Cindy at 8:09 AM